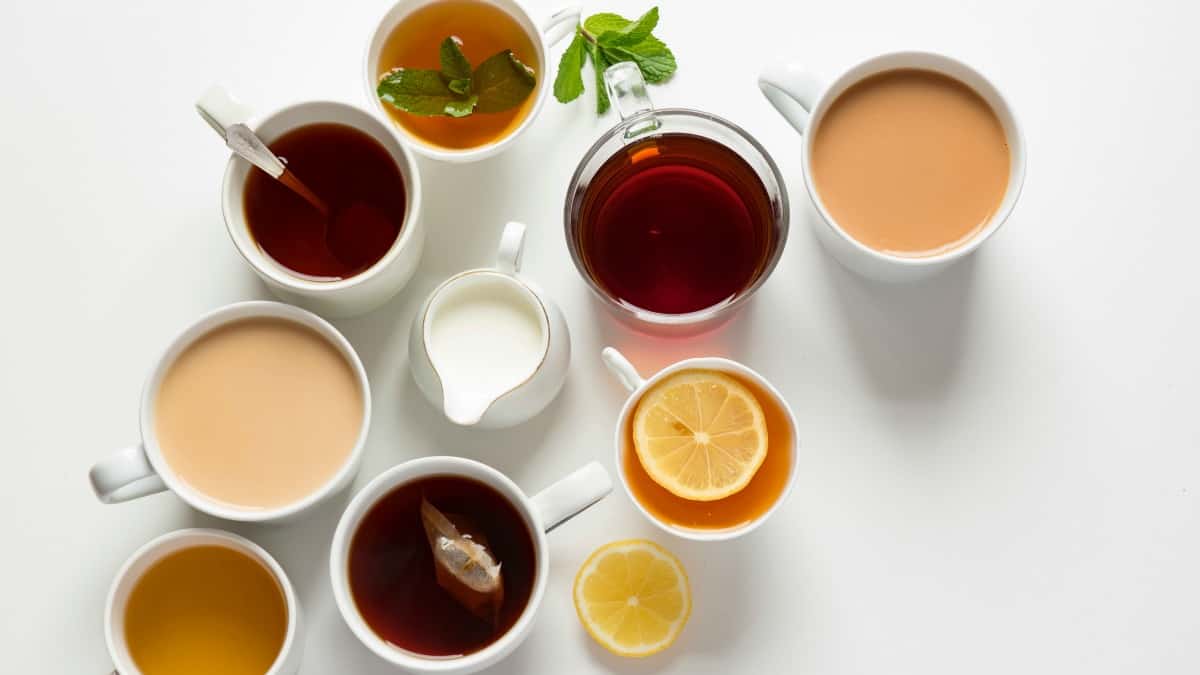 This article originally appeared on Livestrong.com.

Here’s a look at 10 common ailments and which teas can soothe them away.

The most popular beverage in the world as well as one of the healthiest, tea has traveled the globe since it was first discovered in ancient China. For several thousand years people have enjoyed tea because of its medicinal qualities and soothing taste. On any given day, more than half of the American population drinks tea. In fact, in one year Americans consumed more than 80 billion servings of tea, or more than 3.6 billion gallons, and that doesn’t even include herbal teas.

“True” teas — green, black, oolong and white — are all made from the same plant, a warm-weather evergreen named Camellia sinensis. Herbal teas are also available in abundance and can be made from any leaf, root, fruit or flower that comes from a plant.  The varieties and options for teas seem endless, and they are bursting with health benefits.

If you’re feeling anxious, worried or stressed, a mug of chamomile tea might help take the edge off. The daisy-like flowering plant has been used for centuries to ease a variety of ailments. One study at the University of Pennsylvania found that those with a generalized anxiety disorder (GAD) who took a chamomile supplement for eight weeks had a significant decrease in anxiety symptoms compared with those taking a placebo. It’s also free of caffeine, which is important because caffeine can increase anxiety in some people.

Also, green tea (particularly gyokuro and matcha) and black tea contain an amino acid (L-theanine) that is shown to create a calm yet alert state. One study published in the Journal of Functional Foods found that those prone to anxiety were calmer and more focused during a test if they took 200 milligrams of L-theanine beforehand. Supplements usually contain 200 milligrams of the amino acid — that’s equivalent to about six to 10 cups of tea. Another tip: Brewing teas longer will increase the amount of the calming amino acids they contain.

Irritability, weight gain, digestive problems, food cravings, sleep issues — and the list goes on. These can all be symptoms of PMS, or premenstrual syndrome, which can affect women for up to two weeks before they menstruate. Naturally decaffeinated herbal teas are the best choices during PMS because caffeine can increase levels of hormones that exacerbate the symptoms.

One of the most popular herbs in the world, chamomile is a smart tea choice during that time of the month because it has been shown to relieve muscle cramps and reduce tension that can lead to anxiety and irritability.

One of the most common skin problems, acne results when clogged pores or cysts are formed on the face, shoulders, back and chest. While no tea in itself can cure acne, some may help combat these nagging blemishes. Herbal teas (rooibos, spearmint and chamomile) have been used — as an herbal tea and topically — to combat acne and other skin ailments.

Rich in two powerful nutrients for clear skin (alpha hydroxy acid and zinc), rooibos tea may help reduce acne, sunburns and winter skin dryness. Used for centuries by healers, chamomile tea is another skin-clearing tea due because of its anti-inflammatory benefits, which can reduce inflammatory acne and rosacea.

If you enjoy mint tea, your skin might enjoy it as well! Spearmint tea offers antioxidant benefits that may help prevent clogging of the skin and discourage the growth of bacteria that cause acne. In addition, spearmint tea has also been shown to help prevent hormonal imbalances that can lead to acne breakouts.

Having trouble getting your ZZZs? There are some teas that can help. Appropriately named Sleepy Time tea is a type of herbal tea blend produced by Celestial Seasonings. The main herbs in Sleepy Time tea are chamomile, spearmint and lemongrass. Chamomile may be the most sleep-inducing component in the mix — it has long been used to reduce anxiety and aid with sleep.

Valerian root tea is another tea to consider if you are having trouble sleeping. Since the time of ancient Rome and Greece, the herb has been used as a medicinal remedy, including for insomnia. Valerian root contains natural compounds that act as a sedative. Drinking valerian root tea a couple of hours before bed can be a safe alternative to other types of sleep aids. However, talk to your doctor before taking valerian root because prolonged use can lead to dependency and interfere with certain prescription medications.

Including hot tea in your diet may help you drop a few pounds. One observational study showed that those who reported drinking hot tea had a lower weight-to-height ratio (or BMI) and a smaller waist circumference as compared to non-hot tea drinkers. However, the opposite was true for those who reported drinking iced tea, probably because it’s more likely to be sweetened.

As for what type of tea is best to help shed pounds, green tea contains a polyphenol called EGCG that has been shown in some studies to increase fat oxidation and have thermogenic (or metabolism boosting) properties. White tea also contains the antioxidant EGCG and may help prevent new fat cells from forming.

In addition, a South American beverage, yerba mate tea, is a central nervous system stimulant containing caffeine as well as many other beneficial plant compounds. Known as a cravings-killer, yerba mate tea also helps slow digestion so that your stomach stays fuller longer, which can help you eat less overall.

Tummy upset? Drink some tea. Ginger, peppermint and chamomile are all herbal teas shown to help settle a queasy stomach. Researchers believe ginger contains chemicals that not only work in the intestines and stomach to reduce nausea, but also possibly in the brain and nervous system.

Peppermint tea has long been used for an upset stomach, and several studies have shown that peppermint oil may be beneficial for those with irritable bowl syndrome (IBS). Peppermint tea has also been shown to help alleviate gas and promote digestion (by increasing the flow of bile) as well as help unwind stomach cramps and ease nausea.

Derived from daisy-like flowers, chamomile tea is also a popular remedy for treating upset stomach. Known in Germany as “capable of anything,” chamomile tea has been shown to reduce muscle spasms, help treat digestion and ease flatulence and heartburn.

If you are looking for a natural remedy for headaches, several herbs can help. Ginger, chamomile and feverfew teas have been shown to reduce tension headaches and ease migraines. Used medicinally in the West for at least 2,000 years, ginger tea provides anti-inflammatory benefits that can block swelling in the brain. Ginger may also reduce nausea or vomiting, which can sometimes accompany a migraine.

The “cure-all tea” chamomile has compounds that can ease pain and relax you. An herb native to Europe and Asia where it has long been used for headaches, the feverfew plant looks very similar to a daisy. Since it tastes very bitter, adding milk or a little sugar can help. Several active compounds in feverfew tea provide a sedative, anti-inflammatory effect that is commonly used to reduce minor headaches as well as migraines. For best results, drink whatever tea you choose as soon as you feel a headache coming on

Itchy eyes, sneezing and congestion can all be symptoms of seasonal allergies. While some allergies are so severe they require attention from a doctor, milder cases can often be helped with at-home remedies. Peppermint tea, green tea and nettle tea may all help reduce allergic reactions.

Peppermint contains menthol properties that can help break up mucus and clear it from your throat and nose. Green tea provides powerful antioxidants (called EGCG) that have been shown in lab tests to inhibit allergic reactions; however, the benefits are not noticeable for seasonal allergy sufferers.

For those suffering from seasonal allergies, stinging nettle tea may improve symptoms like sneezing, stuffy nose and itchy eyes because the tea has antihistamine properties that may help prevent allergy attacks from happening in the first place. As for what to avoid: Chamomile tea is actually not a good choice for people with ragweed allergies because it may increase the reactions.

While you may think alcohol is the best beverage for getting you in the mood — and it certainly can help reduce inhibitions — ginseng tea may also help. Panax ginseng, which is commonly known as Chinese or Korean ginseng, is usually grown in Northern China and Korea. According to traditional Chinese medicine, panax ginseng stimulates the body and promotes yang energy.

The main active components of panax ginseng are ginsenosides, which offer a variety of health benefits. Traditional Chinese herbalists have recommended Chinese ginseng for centuries to boost vitality and sexual wellness for both sexes. Panax ginseng has been shown in studies to help combat erectile dysfunction, and American ginseng may help increase sexual desire by increasing dopamine in the brain.

When it comes to bad breath, certain teas may help. Black tea is full of polyphenols, powerful antioxidants that help stop plaque from sticking to your teeth. Bad breath is often caused by plaque buildup as well as other dental problems.

Studies have also found polyphenols from both black and green teas destroy the growth of bacteria in the mouth that can lead to bad breath, tooth decay and even mouth cancer.

As for minty-fresh breath, it’s no accident that most toothpaste contains peppermint flavoring. Providing a fresh and clean mouthfeel, one study showed that peppermint oils help reduce bad breath more than a lab-produced mouthwash. Drink a mug of black, green or peppermint tea the next time you want to freshen up.

Do you have a favorite tea? Do you drink tea to help with a health condition? Leave me a comment. I’d love to hear from you!